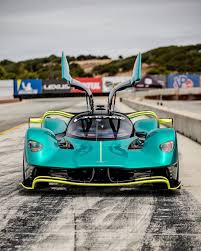 The father in question is Tom Hartley Jnr, owner of a hypercar dealer in London, UK, which is how he had access to the multi-million vehicle. The young boy looks happy to see the Valkyrie after a tiring school day. In the video uploaded on Twitter, we can see him waiting for his father to open the gullwing doors, and then staring at the exposed carbon-fiber monocoque of the hypercar. 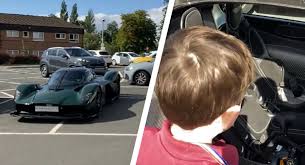 In any case, it will be fun climbing in the pure racecar interior and hearing the V12 engine roar during the start-up. Aston Martin will build 150 Valkyries, plus 85 for the Valkyrie Spider and 40 for the road-going Valkyrie AMR Pro. The road version features a mid-mounted naturally aspirated 6.5-liter V12 from Cosworth and a Rimac hybrid system that produces a combined 1,160 hp (865 kW / 1,176 hp) and 664 lb-ft (900 Nm) of torque.

This particular Aston Martin Valkyrie is currently listed for sale on Tom Hartley Jnr’s website. The price has not been disclosed, but we believe it will be around $3 million more. The model is painted in British Racing Green combined with a black Alcantara interior, matte black magnesium wheels and many optional extras.

It also comes with two pairs of headphones to protect your ears from the high-revving V12. The listing indicates that the hypercar has 75 miles (121 km) on the odometer, presumably after the dealer spun it.